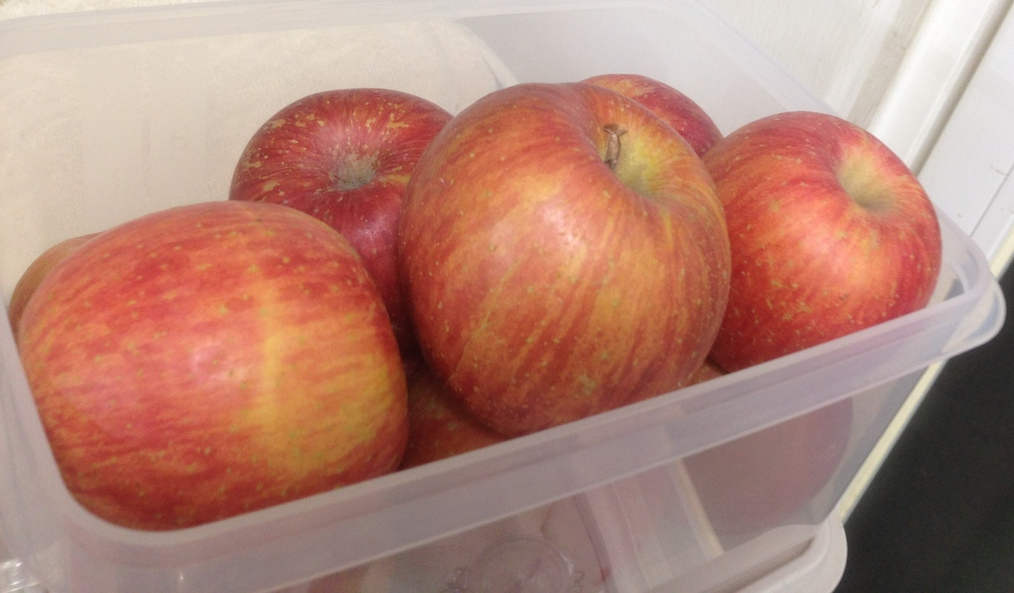 Here’s an email I sent recently about a cooking failure and a big success:

Have you had any triumphs in the kitchen lately? Or perhaps a terrific flop? I’ve had both in the last month or so.

On December 30 I undertook to make apple butter. We had ordered a box from a farm about a month earlier and time was running out to make good use of them. I was out of jam, too, and I’ve been making PB&AB sandwiches since I was seven.

If you’ve never made apple butter, the recipe is simple enough:

For details I went with this.

The first part went well enough. I returned home late that evening to find some delightful applesauce waiting for me. In fact I had never made applesauce before, and as I blended everything and got it going in the slow cooker again I couldn’t resist having more than a little. As I went to bed I thought I really had overdone it with the sampling.

I set it going in my kitchen overnight. My apartment being a studio, my kitchen is also my bedroom. Apple butter recipes all talk about how fragrant the process is. As I slept overnight the apple scent got stronger and deeper. By early morning I was actually quite disgusted with it; I’m not sure such things are really supposed to be mixed. Sure, you want to wake to the pleasing aroma of cooking food in the morning, but it’s a mixed message if something cooks all night as you rest.

I tried switching the crock pot to keep-warm, but to no avail. In desperation I unplugged it and removed it to the only separate enclosure in my apartment, namely my bathroom. Though it was quite cold outside I cracked the window to let in some fresh air. As some time went on I realized I didn’t feel much better, but rather worse. Soon sure enough, there I was throwing up rather impressively.

As the day went on I developed a fever, and it became clear I would not be leaving my house on New Years’ Eve. I threw up just once more. Other than the fever and being wiped out I didn’t have other symptoms, so I passed the time agreeably enough given the circumstances. My girlfriend took care of me. (Have I mentioned my girlfriend?)

The next day too I wasn’t up for much, and it wasn’t until evening that I was able to venture out for some bibimbap. Finally the next day I was able to confront that awful unfinished business. Though the apple butter process accompanied and perhaps aggravated my illness, I thought it unlikely to actually be the root cause. In retrospect I was already coming down with it earlier that evening. But by now it had been sitting at room temperature for two days. In a bathroom. The association was hard to shake, and by now I had not much time before Korean school would resume and much to prepare. Part of me really thought I should just give it a robust boil and then can it. But that part of me lost. As I dumped the apple butter the same place it had sent me, I felt not tragedy but relief. It sure looked like apple butter, but I can’t tell you how it tasted.

This past weekend I was in charge of making the church’s Sunday lunch. So on Saturday three of us gathered to prepare some ethnic food: chili! We went to Costco for supplies. I felt bad buying what I knew to be factory-farmed beef ( proudly “Aussie grain-fed”) but I couldn’t see a way around it. It was more expensive than I thought it would be; about $30 for 2 kilograms, when the recipe I had drawn up called for 3kg in order to feed 40. Since our budget was only about $40 I didn’t get any more.

Kidney beans. Or at least pinto. These were hard to find. I had found black beans at Costco before, and for myself that day I picked up garbanzos, but no classic chili bean was to be found. Canned tomatoes are scarcely sold in this country but Costco came through for us here. We had no trouble finding a decent-sized brick of cheddar cheese, to be grated the next morning with the small paddle grater that’s the best I’ve come up with so far. 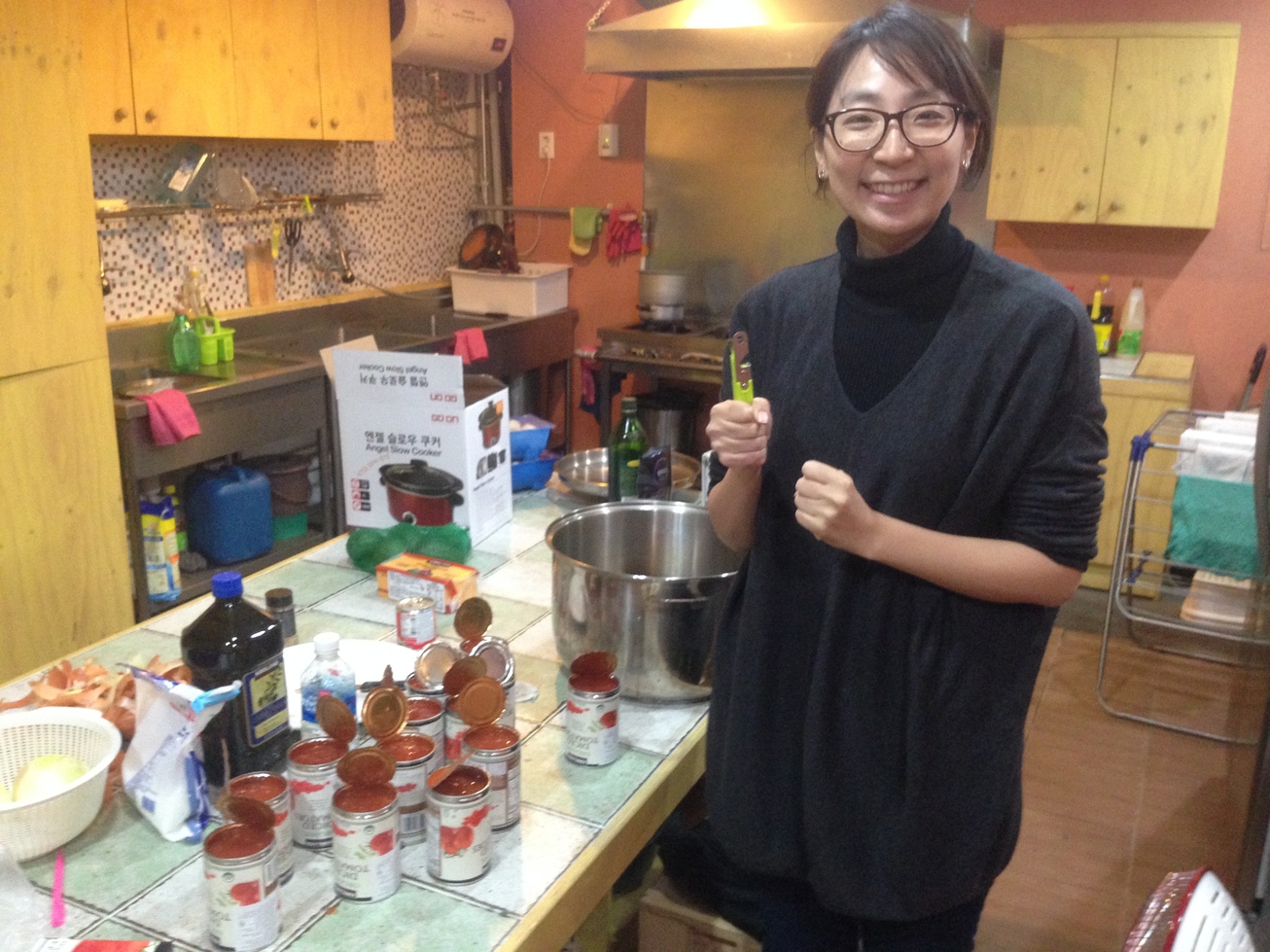 As for spices, I still had cumin from making black bean soup before. I realized I may not actually like cumin very much, but it seems to go far with the crowd. Instead of buying some Western-style chili powder, I planned to use the church’s own stash of gochu-garu, or “chili powder.” The stuff is about as important to the Korean kitchen as flour is to the American one. The church makes the year’s kimchi all in one day in November, and as such there was basically a garbage bag full of the powder resting in the church freezer. I was sure even if the flavor was a little different from our powder it would be a good bridge from the Korean palate.

A can of chipotle en adobo didn’t hurt either.

The actual cooking went off without a hitch. I was pleasantly surprised that we weren’t up into the wee hours desperately trying to make it work, but the three of us got it done in just two and a half hours or so.

We decided to make a separate smaller pot more kid-friendly. I wasn’t really sure how to do this. What does kid-friendly mean in the abstract? Korean kids eat plenty of things that many American adults would scoff at, but they’re still picky and narrow after their own fashion. We settled on adding little spice and doubling the tomato paste, figuring what kids don’t like is complexity of flavor, and tomato paste is great at absorbing that.

I forgot to mention the bean miracle. For no discernible reason there were exactly the right amount of perfectly cooked red kidney beans sitting in the freezer. It’s not like there were various and sundry things in that freezer. It was basically the gochu-garu and kidney beans and not much else. Thanks Dad!

We served it on rice. This is another way chili is a great bridge dish. Rice is a perfectly legitimate base to serve chili on, and it of course makes it more familiar for Korean diners. I thought about trying to order some long-grain rice to make instead of Korean short-grain, but why bother.

In the end it was a real success. From the most starved-for-America young girl to the eldest Korean palate, second helpings were had. Like any meal, we served this with church kimchi, which at this stage in its life cycle is close to peak deliciousness. But a large number of kimchi leftovers found their way back to the kitchen. Yet we didn’t run out of chili, and had just some leftover from the kids’ portion.

I had prayed that the meal preparation would go off well and there would be enough food and that it would be good and even provide a little window into the realized kingdom. I think God answered! Praise to the Lord. 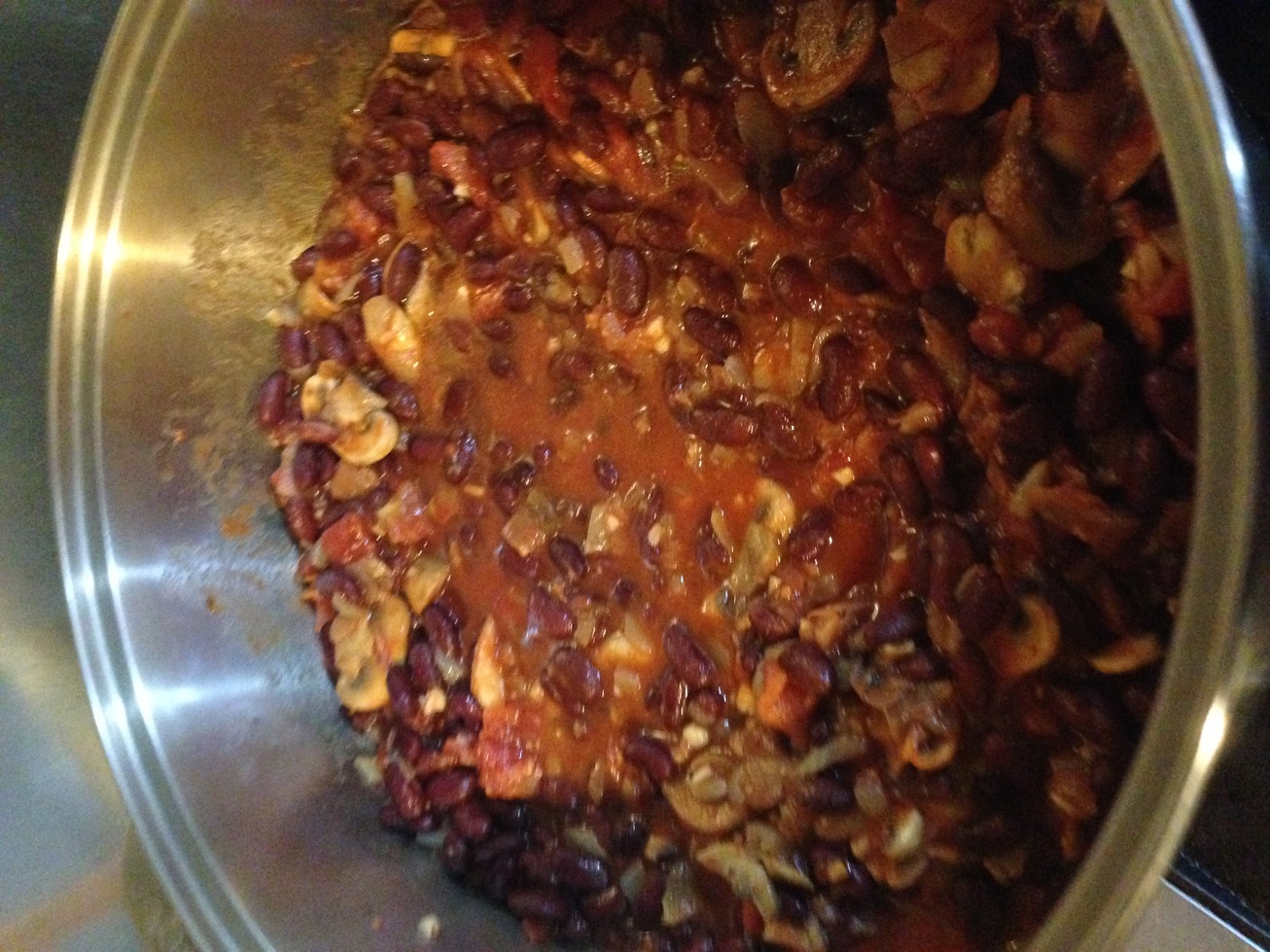