Due to the surge of the world population in recent decades we are used to thinking of the problem of having too many people. Those concerns are still reasonable, but many places in the world are facing the opposite problem: catastrophically low birth rates. South Korea’s birth rate is just about the lowest in the world, and it’s become a major public policy goal of the government to encourage people here to have more children.

Now, there is an obvious solution to this problem. Reserve seats on transit for pregnant women and other vulnerable people. In fact, that’s what is already done. There’s a whole section of such seats on the subway, and the easiest seats to get to on the bus are thus reserved as well:

Problem solved, right? Well, in practice, these seats are expected to go to the elderly only. The elderly are a complex population here. They’ve been through so much and lived through so many iterations of the nation. Many have lived very hard lives, never received much of an education, and may not have anyone to take care of them. Many are poor and comparatively many commit suicide. Plus, as a Confucian society Korea has rightly always venerated its elders.

So to imagine an old man giving up his seat for a pregnant woman is actually complicated. Plus, for a woman to declare herself as pregnant is often fraught with peril, especially early in a pregnancy, even though nausea in that time may make standing rather more difficult than it would be in, say, the second trimester. Add to that generational antipathy (young people today and their loose morals) and fears of abandonment among the elderly and there’s a lot of pain to go around.

Okay, so if we’re going to get a seat for pregnant women, it’s best not to pit them against the elderly. I know, we’ll just reserve another seat for them out of the general seat population! One just for pregnant women and mothers of young children. Thas’s exactly what we’re trying to do: 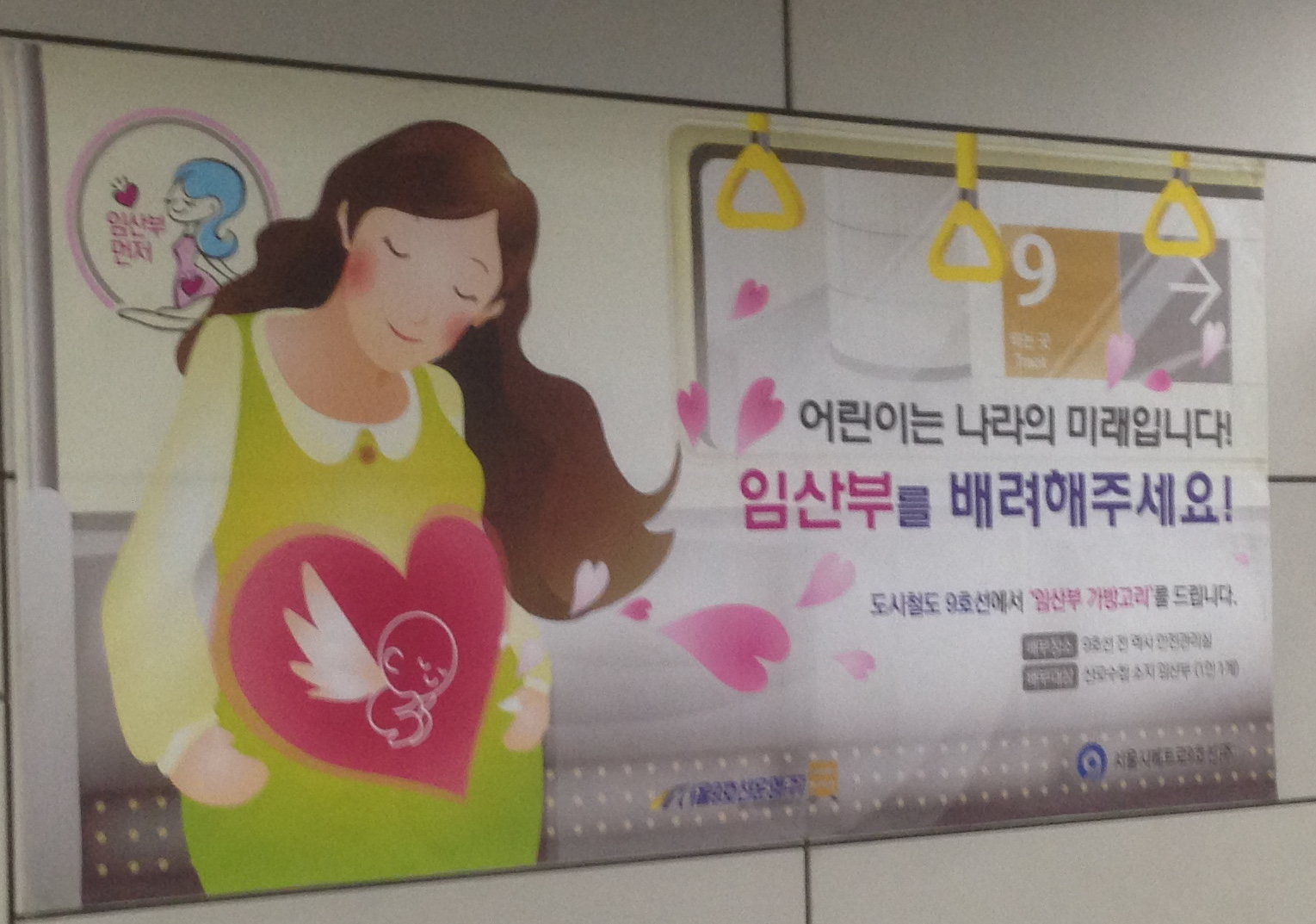 This government ad in a subway station reads, “Children are the future of the nation! Please care for pregnant women,” and probably goes on to talk about the seats reserved for them. The thing is, early efforts in this regard were not so successful. A problem is that the newly-reserved seats on the subway were not physically separated, as the other vulnerable-person seats are. Just a decal behind them indicated they were reserved. That made it hard for people to realize while staring at their smartphone during the shuffle and crunch of many passengers coming and going that they were sitting where they shouldn’t.

Not one to give up so easily, the government has redoubled efforts recently, and one initiative is to really make these seats stand out: 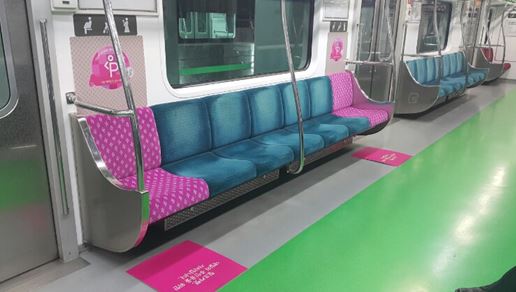 Despite my limited knowledge of Korean, I’ve also noticed the likes of recorded announcements on the bus in the spirit of this campaign.

Hopefully it works. Coming home last night I noticed a man slide over into the pregnancy seat, but then realize where he was and slide back to another empty seat. So that was promising. But a couple of stops later the car was much fuller and the seat was occupied by another indifferent smartphone-gaper. I don’t know if the culture will develop to the point that people leave these seats unoccupied even when they have to stand in order to do so. And if that doesn’t happen it’s hard to imagine a lot of women early in pregnancy asking people to stand for them.

I give the government credit for trying, though. This seems like a good policy goal to me, and I appreciate that they’re pragmatically concentrating their efforts in a place where it could make a difference. I think there are other policies like encouraging or requiring employers to give more generous leave; I just don’t encounter those initiatives in my daily treks through the city.

If you want to read a little more about the difficulty of solving this problem, here’s a somewhat pessimistic news article on the subject.